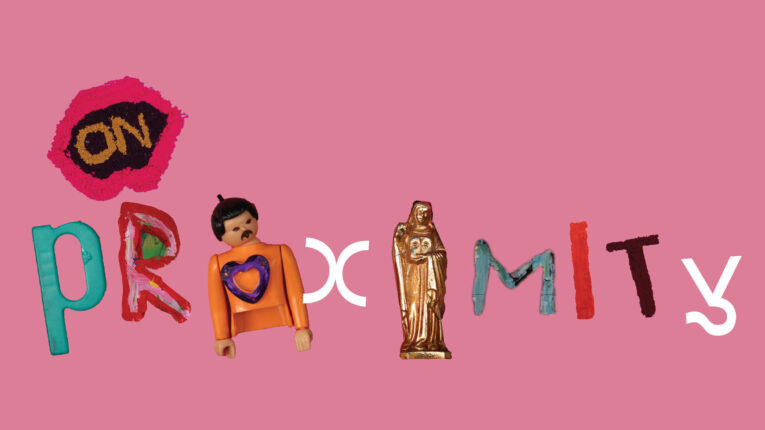 Shortly before the opening of On Proximity, we sat down with Fareed Aziz and Maria Muehombo (the 2 curators of the expo), Mirra Markhaeva (a participating artist) and Elli Vassalou (project coordinator in Globe Aroma).

“On Proximity” is an opportunity to get to know each other but also to work with a kind of freedom. We, as curators, made a framework for the project but we let the artists think how and what they wanted to show.

“The mirrored space” is an approach for the exhibition “On proximity”. The concept of the exhibition is to celebrate this proximity but also the differences. “Proximity” as a word is about ‘nearness in space, time, or relationship’. That’s why we thought of creating a space (= “The mirrored space”) where we build an actual and physical 1/1 room as canvas where artists can enter for some time and start to interact with each other in order to reflect the proximity they had during the last semester, when we were all using the atelier (every three months the workshops/atelier of Globe Aroma hosts a new configuration of artists. Artists can apply for a workstation and get logistic and network support during the time they’re working in Globe Aroma).

We all have different backgrounds but we all work together in one space. During the year, we get to know each other but we do not particularly collaborate together or with everyone. Actually, by working in the same space collectively, we created more of a type of shared work culture and interactions.

The relation between the artists and the space came naturally after some time. “Mirrored Space” is a  reflection on how the artists perceive themselves, how they perceive the world and a reflection on social dynamics and emotions. When you enter the space now, you see so many details reflecting anger, love, peace, friendship, …

We actually created the space in MAD Home Of Creators. That’s why I also like to call it “The traveling space”.  I think it’s linked to my own experience. When you move from your hometown to a new country, you need to adapt but your identity doesn’t have to change.

We encouraged the artists to bring their very own identity however the space can physically move from one destination to another.

I would like the project to keep traveling from space to space. Everytime the space will be different and will interact with the “Mirrored space”. I see it as a living, moving piece that can be re-worded by the artists or new artists.

The first idea is about a physical space where artists feel safe and feel they can express themselves.

We started with a very white canvas in MAD. It was fitting with the white environment in MAD. We actually created most of the artworks or the concepts there during the residency. After a few weeks, we moved to the co-working space of Globe Aroma.

The “mirrored space” took a different or new shape. There were two totally different vibes. MAD was perfect for the beginning of the process and for seeing the space as a canvas. We were more focused. The space there also provided a better opportunity to have some distance and see the space from different angles. You could actually leave the space and then enter the space again.

Here at Globe Aroma, we don’t have that option. You just interact with the space. Artists are used to working in Globe Aroma, so they were a bit intimidated by the space in MAD. Moving back to Globe Aroma inspired us in regards to how a space can be adapted.

In MAD, we were guests, we didn’t own the space, but in a way, we were also more focused on the artworks. Here, I feel that I own the space, like being at home… but here we also have more distractions.

For Globe Aroma, it’s an experiment to see the artists creating a new collaborative project and running it by themselves. In our organization, an artist works on his/her/their own practice in the atelier or takes part in a co-creation project facilitated by another artist. It’s the first time we let the artists from the atelier take over the space and use it.

It’s an experiment in regards to the artist’s autonomy and proximity. We will see how our atelier space will be reborn after the exhibition. I see “On Proximity” as the uterus of building a new culture for the workspace. These 10 artists will maybe carry these new habits and establish it for new artists who will join later.

The big challenge was to deal with the different personalities and the differences between (their/our)  backgrounds. But also a big learning curve as to how to understand each other. The only way we could manage the exhibition for me was that everyone feels free and autonomous. We didn’t focus on the result.

When I look now at the space and think about the process, I notice the space was led by a certain personality and it influenced the other works. I don’t know if he*she was aware or not. It was interesting to me because our project is built as a collective artwork. I wonder how the space would be if this person wasn’t involved in the project.

To me, childhood influences your art because it’s a first approach to art. I also like to remember my imagination as a kid. The artists here went to their very inner demons, to their childhoods memories and they reflected it in this collective space.

I also see a link between childhood and this collective artwork: when you’re kids, you don’t know each other but you play all together in the playground.

I think actually the playground summarizes in a way what happened: moments of collaboration, moments of agreement or moments of coordination. We saw a lot of overlaps, merged works, … I don’t see the project as a project where people are collaborating but more a project where ownership is questioned. I saw people working and being influenced by the proximity they had with the others’ artworks.

At the same time, it’s beautiful to see everybody’s style (even 3 artists) on each other. The characters of each artist are alive and in the same space.

As Fareed mentioned this is or should be a traveling space. It makes me think of the Berlin wall. There is the freedom to pass on the work of other people.

We now have 10 walls, like 10 sheets with unlimited possibilities. We see it as a living space that can be re-organized.